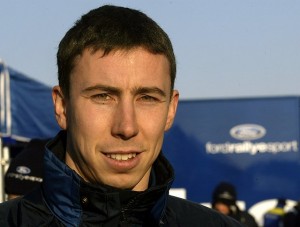 Markko- “This has come 12 months later than I thought but it was the most incredible feeling to stand there on the winner’s podium with my Focus, surrounded by all the team who have worked so hard to make this possible. It’s been a hard weekend but I’m just so happy that my first win has finally happened. It’s been a long time coming and I’m relieved as much as anything. We’ve proved again that the Focus is fast, reliable and strong on the roughest rally of the season. Everyone in the team has put in such a huge effort with the new car in the past few months and this is a great reward for them also. After recent disappointments, luck has finally been on our side here and let’s hope it remains with us.”

Co Driver- “Beef” Park- “With the bonnet incident, he started to lose his rag just before the end of the stage. Just the last two to three kilometers he started to get a bit angry because the stage seemed never ending. He was obviously getting affected by the heat then. So it was just a case of trying to calm him down, reassure him he was doing a good job and not to get too ragged because it is easy to lose control when you lose concentration. To be fair, for the rest of the time, throughout the whole event, I don’t think he was ever not in control of the situation. He is very clever. On the last day we gave him the split times for the first split of every stage and then he knew what pace to drive at. On the very first one of the day we were five seconds quicker than Carlos. When I told him that he calmed down and slowed down just a little bit once he realized he didn’t need to push so hard. He is very tactically aware.”

Markko (on the same incident)- “I felt pretty relaxed all the way through. I wasn’t really worried, I just tried to do my best and relax and even on the last group of stages, I didn’t feel under pressure. I’m not sure whether Beef felt the same!”

How did Markko celebrate his big win?- “We had a team party on Sunday evening by the swimming pool of a local hotel. I’m sure you don’t need me to tell you where virtually every team member ended up!”

Markko- “Finland is the one I want to win. I want to beat the Finns on their home rally. Winning my first event was fantastic, but now I want even more. I think we can win more rallies this year; we can now see that the Focus works well everywhere.”

Beef- “For him, driving is all about speed, it is not about going around in second gear and going really slowly. He is a sixth-gear fan! He loves putting the car in top gear and going flat out, like many drivers do.”

When Markko got caught in the dust of Harri Rovanpera he said the situation was, “Slightly inconvenient.”

(Note : Hyperbole is obviously not one of Markko’s faults….it’s warm? It’s inconvenient? What about, “It’s incredibly way too hot!?” or,”It was bloody awful!” )

Beef- “I think we are popular victors. Maybe they won’t be so gracious next time we beat them.”

Robert Reid- “Markko and Beef are mates, Beef in particular. We were competing against him in the Peugeot Challenge way back in 1991 and then he did gravel notes for us for four or five years so it’s great to see someone who is a close friend getting the success they deserve, and it’s nice to think that you may have been some help along the way to that. Richard’s very friendly with Markko so he was pleased for them as well.”

Paul Turner, Markko’s Manager- “We had a long chat last night and we decided that if it (the win) is meant to be, it will be. If it doesn’t happen here it will happen on another rally. It’s the culmination of seven or eight years of his life and most people in the service park would be delighted if he won today.”

Markko- “Bit better luck than the others there for a change. It was a difficult morning and on the second stage we had to stop almost, twice (in Rovanpera’s dust.) This morning I was a bit tired, I was a bit weak, but now it’s getting better. We still have the longest stage of the rally to come again. We’ll have to make sure we keep the bonnet shut this time.”

Markko on the Inmarsat award- “I am absolutely thrilled to have finally won my first rally and am delighted to be recognized by Inmarsat and have decided to donate the monies to the Tartü lastefond, a local children’s hospital from my hometown. They have been working hard in recent months to raise funds for new breathing and ventilation equipment for newborn babies. I hope that the donation will be a great help in achieving their targets.”

(Note: Isn’t he just the sweetest?)

Markko- “It has been a very interesting and exhausting day because I had to do the long stage with a closed roof vent. I was quite tired and on the last group of I could feel it again – my brain was overcooked!”

Markko- “I wasn’t expecting to be back driving; in my country after you have a sauna you have a drink and relax but I had to do some stages.”

Malcom Wilson- “When you have Carlos Sainz coming up to you and telling you that the Ford engine is stronger than the Citroen, then that is good!”

Markko- “I haven’t seen a car that drives quickly without a driver! It is always more than one part.”
Markko- “We were so fast into corners that I surprised myself and sometimes the speed was such that it was hard to get all the pace notes in. It’s like being in a PlayStation game!”

Markko – “This car can win in New Zealand, Finland, on asphalt, on gravel. It will suit every kind of rally.”

Markko- “I was stuck in second gear for quite a long time. It was very boring – there’s nothing to do when you are going so slow.”

Markko- “Every rally I try to be better than on the last one. For sure, we want to improve. On paper it looks as though we have everything we need to get better results. But I have no idea what it is like out there. We have to go to Turkey and see what the conditions are like and then we will know more. At the moment we are just guessing.”

Markko- “The Swedish Rally is one of my favorites. If the conditions are right the roads are great fun to drive on. They’re fast and straight with a lot of fifth and sixth gear driving which I really enjoy.”

Markko on the Sanremo Rally- “I’ve finally made it to the finish here!”

Markko- “I’ve earned every penny of my wages this morning. The car hasn’t handled properly and it’s been hard to keep it on the road. New Zealand was like a joyride compared to this morning! I also had a big scare on the fifth stage at a huge jump. We took off and all I could see was sky and I only like that view from an airplane and not a rally car. I really didn’t like it and it was hard to regain my concentration after that.”

Richard Burns on Markko’s last try in Greece- “I don’t think there’s any doubt that if he hadn’t had that puncture, he would have won. There was never one stage where he looked weak, not a single chink in his armor. Even when he was running in the same position as everyone else on the second day he was still quicker than his team-mates Colin and Carlos. He was damn unlucky not to get his first victory there.”

Markko sick in Monte Carlo- “I didn’t get much sleep last night, if any. I have a bad stomach and no energy. I could have pushed harder in the stages but I just didn’t have the strength to do so. I feel better now than I did this morning when I thought I was going to be sick in the car at one point. Now I just want to go straight to bed.”

During the EOS Rally Estonia a loose wire in the cars’ intercom system made Markko only able to hear only snippets of words while Beef read pace notes through two of the race’s stages and they still won.

Markko says – “I hardly ever listen to him anyway… he talks too much!”

Prime Minister of Estonia, Siim Kallas- “That was fantastic. It was amazing fun. I’ve been following Markko’s progress this year in the World Rally Championship and to go in the car with Markko was an honor for me. Markko is such a great sportsman and he’s a great ambassador for Estonia.”

Markko in the Safari Rally- “The good thing about today is that I’m one night closer to going home!”

Markko at the 2002 Acropolis- “I’m just very, very disappointed. I know I had the speed to win this rally. I don’t remember much about the last two stages because I’m just so gutted not to be leading anymore. Basically everything is OK, but the tires were finished at the end of the stage.”

Markko Martin on letting Jordan-Ford drivers take the wheel- “I’m not a very good passenger so I was a little bit nervous to start with. But both Giancarlo and Ralph are excellent drivers and they adapted to the car very quickly. There was one point with Ralph as we were approaching a jump that I grabbed hold of my seat but these guys are good. They were on the pace very quickly!”

"Bit better luck than the others there for a change. It was a difficult morning and on the second stage we had to stop almost, twice (in Rovanpera’s dust.) This morning I was a bit tired, I was a bit weak, but now it’s getting better. We still have the longest stage of the rally to come again. We’ll have to make sure we keep the bonnet shut this time."
Read more quotes from Markko